Rupture of the syndesmosis of the ankle joint, distal tibiofibular, and other types

Rupture of the syndesmosis: types, causes and methods of trauma-healing

In the human body bones can be connected as a movable and a stationary way.

This sedentary articulation of bones by means of a layer or bundle of dense connective tissue, present between the bones of the skull, lower leg, forearm, spinous processes of the vertebrae.

In the form of a layer of connective tissue syndesmoses can look like a membrane (membrane), the seam or «welding». The membrane is connected to the tibia with the fibula, and ulna with radial transverse surface of the vertebrae and their spinous processes.

In the form of sutures syndesmoses are present between the cranial bones. They are divided into flake, flat and toothed. The term «welding» refers to the connection between the tooth root and the inner surface of the alveoli.

The most frequently damaged interosseous membrane between the tibia in the lower third, front and rear SYNDESMOS included in the composition of ankle joint and involved in ensuring its stability.

Basically, the injury occurs in athletes when jumping or running, dancers, circus performers. It looks like isolated stretching or rupture of ligamentous bands, and as an combined with fractures or separation of a fragment of the ligament with a piece of bone.

In particular, due to birth trauma in newborns, the interosseous membrane of the skull can be broken or have a hemorrhage.

In compression fracture of the spine, where one vertebra is pressed into the other, interspinal and transverse syndesmosis often do not undergo complete rupture, but may be stretched or have partial damage to the fibers with hemorrhages.

Rupture of the tibiofibular membrane 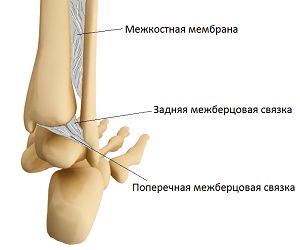 of the tibia and fibula along their entire length.

READ  Arthritis of the fingers: features of the disease, its types and treatment

The main part of the membrane is called the interosseous membrane, only the lower part of it and actually called the tibiofibular syndesmosis.

Normal tibiofibular width of cracks not exceeding 3 mm. fibers of the Fibrous covering her, crossed or parallel to each other and are in several layers, of which the inner is more durable, but the exterior are more susceptible to sprains and tears.

This explains the possibility of partial rupture of the distal tibiofibular syndesmosis.

The majority of patients are athletes, experiencing the action of a lateral impact forces, football players and hockey players. Among them are frequent pushing, strong on her legs and falls.

From injury tibiofibular membrane, no one is immune, though certain professions (ballet, circus arts, choreography) increase their risk.

Breaks and sprains tibiofibular joint are included in the combined injuries in many car accidents and accidents, you can get them, falling on the slippery road or from a small height.

High heels also increase the possibility of injury. Most commonly there is a rupture membrane at the tibiofibular fracture and dislocation of the ankles, with severe pronation (turning outward) of the foot and simultaneously its rotation (turn sock inside).

In such an arrangement, a gap occurs along the line of attachment of the fibres to the tibia.

The symptoms of injuries of the syndesmosis is composed of severe pain, aggravated by palpation and change the position of the foot, and swelling, growing with every minute.

Radiography in such cases is mandatory. The pictures, taken in two projections, and with the stress on certain ligaments is clearly determined by the extension tibiofibular gap, the line gap, the presence of fractures.

With the help of radiographs to exclude sprain, partial rupture of membrane joint, and to clarify the treatment tactics.

READ  Sclerosis of the spine

Uncomplicated partial and complete rupture of the tibiofibular joints begin to heal with conservative methods. 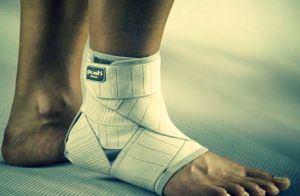 For anesthesia is novocaine blockade. The main task is to completely immobilize the injured area, compress the expanded tibiofibular gap, to give time for the ligaments to repair themselves.

On the ankle a plaster in the form of a boot for 5-6 weeks. He then removed, replaced by a removable splint for another 2 weeks. At the same time begin to carry out physiotherapy, massage, do therapeutic exercises.

Conservative treatment is long and not always 100% effective. For another 6 months can lead to decreased functionality and pain.

In advanced or complicated forms to rupture of the tibiofibular articulation (failure of conservative attempts to close the gap between the bones of the lower leg, incorrectly fused fractures of the ankles) therapy is the use of surgical methods.

Of them traditionally used two ways:

Breaks tibiofibular membrane are accompanied by vascular disorders. Sometimes, possible thrombosis of the venous vessels. To prevent such complications are assigned to anticoagulants, amyotrophia means that speeds recovery.

Features of injury to the ankle joint

The syndesmosis of the ankle joint formed by the interosseous membrane, and lateral, front and rear tibiofibular ligaments.

It securely locks the ankle, not allowing its components to move relative to each other. Injuries to the syndesmosis occur quite often: 20% of all damage to the supporting apparatus.

READ  Treatment of folk remedies and techniques at home

Of them 12% are partial and complete tears of the ligaments.

Cause of injury – the effect of lateral or direct force on the joint. 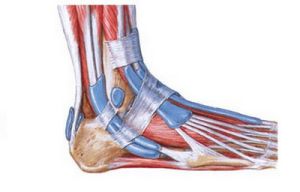 A variety of punches, collisions, slipping or falling with povertyline of the foot is the most common etiological factors.

Symptoms of sprains and ruptures of ankle syndesmosis similar: sharp pain, redness and increasing swelling of the joint, bruising, gentle and unnatural position of the foot, its deformation.

Often trauma is combined with malleolar fracture with displacement and without it. To make a differential diagnosis will help radiography.

In the images in multiple projections clearly differentialsa the status of all ligaments and bony components of the joint.

Treatment after the injury

Therapy fresh (20 days) injuries of the ankle syndesmosis is conservative.

It consists of local anesthesia, reposition and fixation of the foot in the normal position, the imposition of a plaster bandage and complete rest.

Chronic tears (more than 20 days) it is better to treat surgically. Possible ligament sew or make them plastic, at the same time in the presence of the fracture fragments are fixed with metal structures. 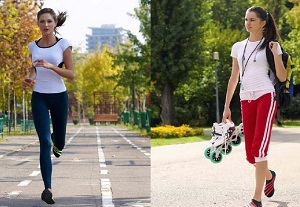 Prevention of injuries of the syndesmosis are wearing supportive shoes with a wide and low heel, caution on the ice, while running and jumping.

It is necessary to strengthen the ligaments nutritious meals, exercise all possible sports. Professional athletes use special fixing bandage.

Therapy injuries syndesmosis should start on time as the running time longer and harder. Proper and competent treatment restores function of the joint in full.