The reasons for the development of myositis of the back muscles, the symptoms and treatment of the disease

The symptoms and treatment of myositis of the back muscles

Myositis of the back muscles is a violation of their contractile ability that develops due to the deterioration of blood circulation and inflammatory processes. Dorsal myositis occurs in two forms – acute and long-term chronic.

In the phase of remission the person doesn’t feel any unpleasant symptoms, but under the influence of any provoking factor myositis begins again to manifest with pain and significant limitation of motion of the lumbar region, problems with the movements observed in the lower extremities.

That provokes the manifestation of the disease

In the survey of patients found that myositis is most often develops under the influence of the following reasons:

In patients with myositis with careful questioning often reveals the simultaneous effect of several adverse factors, which reinforces the symptoms of the disease. There is also a certain category of people who have identified predisposing to the emergence of dorsal myositis diseases and professional factors.

The risk groups include:

To precipitating factor of myositis can be attributed to a General decrease in the protective forces of the organism.

READ  The deposition of salts in the cervical spine: causes, symptoms and treatment

The disease often occurs in those people who periodically suffer from different respiratory diseases.

Classification of forms of the disease

Myositis is divided into acute and chronic, the course of the disease depends on the underlying cause of the pathological process.

The origin and course of the disease:

Typical symptoms of the disease

The main symptoms of myositis of the back muscles is their pain and limitation of movements. Pain in a certain place of the back develops over several hours and days, pain so intense that makes a sick person to find a comfortable position. 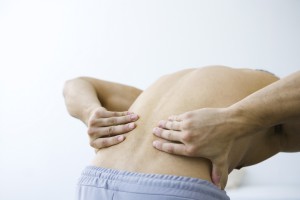 With limited motion, as well as their conduct causes increased pain. Tenderness is enhanced by the feeling of muscles on palpation in the region of tension can be identified and the muscle strands.

Suppurative myositis of the back muscles is accompanied by all the symptoms of intoxication – fever, weakness, headaches. The rise of temperature is often defined and post-infectious myositis.

The chronic course of any form of myositis develops muscle atrophy, as a consequence, muscular frame relaxes back.

The diagnosis of myositis is not difficult to exhibit, the doctor’s clinical picture suggests the presence of muscle problems. To confirm their findings, it needs to be:

Treatment scheme of the disease

Treatment of myositis of the back muscles is the use of medication, physiotherapy, techniques of manual therapy. Only a comprehensive treatment implies complete recovery of the patient and prevents the transition of the acute phase of the disease in a chronic form.

What to treat myositis of the back muscles should be determined only by the attending physician! Self-treatment is dangerous and fraught with disabilities.

To prevent the development of myositis is possible with timely treatment of infections. Prevents the loss of muscle the lack of intense physical exertion, exposure to cold. With a long presence in the same position it is necessary from time to time to change body position and use exercises to boost muscular frame.

Video: Treatment of intercostal neuralgia with the help of pillows.