Varus deformity of the tibia — treatment in adults and children, photo of pathology

Varus deformity of the tibia in adults and children

Varus deformity of the tibia is a O-shaped curvature of the legs.

This disease is characterized by the unevenness of the knee in which the lateral condyle of the femur increases, and medial reduced, leading to compression of the medial (inner) meniscus, the expansion of the joint space with the outer portion thereof and narrowing from the inside.

Also there is a stretching of the ligaments that reinforce the knee joint, especially outside. Occurs O-shaped curvature of the shank, and in advanced situations, it may turn the thigh outward and tibia – inside.

Hallux valgus of the tibia is formed a secondary compensatory flat.

Due to the primary deformation and secondary changes lead to deterioration of the functional capacity of the limbs. The joints are exposed to overload, develops posture, the risk of early arthritis and degenerative disc disease increases.

Varus deformity of the tibia does not allow you to straighten your knees completely and often causes pain in the knee when bending.

Necessary to correct such distortion, since the development of the disease in children increases the risk of gait disturbance of a child, causing it to fall and quickly get tired.

One of the main reasons that causes the disease is rickets:

A special type of resistant rickets is a late rickets, in contrast to the usual forms of the disease can not be cured by standard doses of vitamin D.

Developing this type of rickets due to hereditary predisposition, in the presence of chronic kidney disease and steatorrhea.

Steatorrhea (intestinal rickets) develops with duration of the current disorders of the intestine. The cause of the disease is malabsorption of fat, vitamins, phosphates and calcium. In chronic renal disease may experience renal rickets.

However, kidney rickets more likely to develop hallux valgus, but there is varus deformity.

Deformity of the legs may be formed with Blount’s disease.

Blount’s disease (osteochondrosis deformans tibia) is not curved as in rickets, and UGLUBLENNYM curvature of the tibia with a peak of deformation at the upper epiphysis.

For young children characterized by bilateral bending, and varus deformity of the tibia in adults is one-sided.

In adults, this type of curvature can be formed in Paget’s disease, or trauma in this it differs from a children’s form of the disease.

Disease Pejeta is accompanied by damage to the tibia and the femur. Often affected multiple bones, but there may be involvement of only one bone.

Curvature occurs due to the lack of bone tissue destruction when it is excessive growth. To all newly formed bone is not strong enough due to partial calcification.

There is a thickening of the bone and at the same time it becomes soft, which leads to warping and transverse fractures.

With the development of the disease compensatory deformed foot, when this occurs, the displacement of the load from the center to the outer part of the foot, resulting in the loss of the ability to make oscillatory movements of the feet.

In this regard, is reducing its ability to absorb the shocks and aftershocks, that the child often falls and runs poorly, starts to go bad.

READ  Suprapatellar bursitis of the knee

It is important not to miss the first signs of disease to begin early treatment. 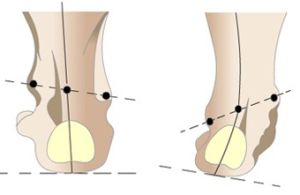 The diagnostic difficulty associated with the slow development of varus deformity of the tibia.

The first sign of a varus curvature is worn out soles of shoes, particularly from the outside. Noticeable uneven wipe-heel Shoe.

Child be worn out when walking more outer side than the inner. This symptom should alert the child’s parents before the appearance of visible deformation of the feet.

All the patients are shown x-rays of the legs.

Treatment of varus deformity of the tibia

Treatment of this type of contortion of the feet is a very long and serious.

The treatment is carried out under the strict supervision of a doctor.

Conservative methods of treatment are physiotherapy and massage. They form the basis of all therapy. In the video you can see therapeutic massage to a child who has varus deformity of the tibia.

It is important to pay attention to orthopedic shoes. The doctor will help you to find the shoes needed to correct the shape of the feet. For the development of small muscles of the foot home, it is advisable to walk barefoot.

In advanced strain shins need to use corrective pilings at night and the constant wearing of special shoes.

With the ineffectiveness of conservative treatment resort to surgical treatment – algezira of osteotomy.

During the operation for correcting of a Shin of the tibia is cut out a wedge-shaped fragment, then connect and strengthen bone using clips or screws.

After the operation is performed osteosynthesis using a compression-distraction Ilizarov apparatus, the design of which is chosen individually for each patient.

In the postoperative period the patient is prescribed physiotherapy and physiotherapy. On average, to correct the shape of the legs should be about two months, when running the deformation term increases.

You may experience various complications as with any surgical intervention.

When conducting the spokes and rods through the bone there is a risk of damage to blood vessels, which can lead to the formation of a hematoma.

Sometimes it is necessary to conduct repeated operations for opening and evacuation of the hematoma. You should perform regular dressings, and to handle needles and rods with antiseptics to prevent infectious inflammatory processes. 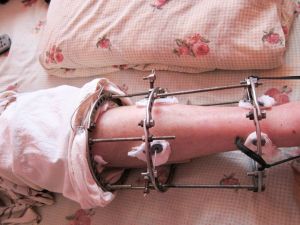 Possible persistent pain in a patient, especially in the case of violation of the mode of motive activity, in this case, it is necessary to apply pain-relieving medications.

Very rarely during operation of the Ilizarov apparatus is breakage of its components. In this case, the required re-operation to replace the unusable item.

Prevention of the disease is control possible causes and risk factors of this problem, as well as early detection of any changes.

In case of detection of the above signs and symptoms should immediately consult a specialist for diagnosis and treatment.