Toxic substances of suffocating action are chemicals that, when inhaled, striking the upper and lower Airways, lung tissue. Poisoning can lead to respiratory failure and death. This article deals with the chemicals related to suffocating substances, the symptoms of which manifested intoxication them, and methods of rendering first aid and components of inpatient treatment.

Suffocating chemicals: description and causes of poisoning them

Suffocating toxic substances are very dangerous to humans. These include phosgene and diphosgene. Earlier, during the First world war, these toxic substances were used as chemical weapons of mass destruction.

The action of phosgene and diphosgene are very similar. The poisoning with them occurs during inhalation. Nowadays more widely used phosgene, it is used in the manufacture of various paints, solvents, polycarbonates. Diphosgene uses in some laboratories, acts as a reagent in chemical reactions.

Later in the article we pay more attention to phosgene, as it is nowadays more widely used, and the clinical picture in his poisoning and methods of treatment do not differ from those of diphosgene.

Suffocating substance is very volatile, is quickly distributed in the environment. Working with them requires great care and thoroughness. The phosgene poisoning nowadays is uncommon. In most cases it develops as a result of non-compliance with safety regulations. Common causes of poganovo intoxication include:

Phosgene, when applied to the skin, mucous membranes, does not bear absolutely no threat to humans. It’s only harmful for respiratory (breathing) intake.

The phosgene poisoning develops very quickly. 3-4 breaths of this substance lead to acute asphyxia and loss of consciousness. Death may occur in minutes.

Phosgene has an odor only at very high concentrations in air. Often they suspect the pollution of air is not possible, the person suddenly begins to feel a sharp deterioration in his condition, not knowing the cause.

Inhalation of air in which there is a large concentration of phosgene, develops fulminant poisoning for several minutes develops the following symptoms:

At low concentrations of phosgene in the inhaled air, the symptoms do not develop so quickly. The deterioration of the people begins to celebrate for the first 5-10 minutes of your stay in the area contaminated with phosgene. Common symptoms:

These symptoms may occur for several hours. A person relatively feels normal. But then gradually his condition begins to deteriorate, is developing pulmonary edema and acute respiratory failure. See the following symptoms:

What to do in case of acute poisoning by phosgene 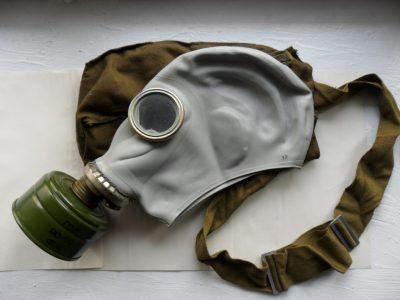 Poisoned man needs to withdraw as soon as possible to fresh air. This should be done wearing a mask. To risk your life impossible! It is also advisable to wear a mask on the patient, before we take it out of the contaminated zone, this way you will reduce the duration of inhalation of a poisonous gas and possibly save his life.

Once the victim was in a safe place, call an ambulance. On the phone to the dispatcher in detail describe the number of poisoned people, their condition. If the cause of the poisoning was some kind of accident or explosion, you need to call the emergency service.

Before the arrival of doctors you a little than can help the patient. Try to calm him down. Cover with a warm blanket, give to drink warm tea. Make sure no items of clothing did not prevent him to breathe freely. If necessary, undo the jacket, tie, shirt.

If he lost consciousness before the arrival of ambulance crews, it should be put on a firm and level surface. Your task will be the prevention of zahlebyvayas vomit. In order to protect it from aspiration, turn his head to one side.

It is also necessary to monitor the presence of pulse and respiration. Their absence signals the development of clinical death. In such a situation, an urgent need to start doing chest compressions and CPR. The basics such resuscitation procedures are taught in school, and possess not hurt anyone.

First aid medical service call, when there is no threat to their lives. The first thing they check for pulse, respiration from the patient, conduct blood pressure control and saturation level. Then the patient entered the medications that are aimed at stabilizing his condition. It is mandatory the use of oxygen, which helps to reduce the saturation level.

Transporterowych the patient immediately to the ICU. Treatment is aimed at elimination of pulmonary edema and heart failure.

Specific antidote for phosgene does not exist, the treatment is purely pathogenetic and symptomatic. After the stabilization it is possible to transfer the victim to the Department of toxicology or cardiology for further treatment.

Substance suffocating actions are very dangerous to humans. Most often poisoning them develops as a result of technogenic accidents and catastrophes. In the case of severe intoxication observed fulminant pulmonary edema and death. If poisoning medium and mild the affected person can still be saved. The treatment is carried out in the intensive care unit. There is no specific antidote.

READ  The tea "Evalar BIO" for cleansing the body and the gastrointestinal tract
Share with friends: