Birth control pills Regulon are an effective means of contraception: a combination of ethinyl estradiol and desogestrel suppresses synthesis of follicle stimulating and luteinizing hormones. Synthetic hormones have an effect, aimed not only to suppress ovulation but also to change the composition of cervical mucus, which hinders the penetration of sperm into the cervical canal and the uterus.

In addition to the contraceptive action, the Regulon has therapeutic properties: some hormone-dependent disease withdrew after the correction hormonal levels in 70% of cases.

In some cases, appoint Regulon 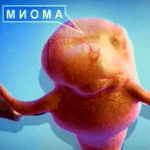 Instructions for use indicates the rational use of drug with estrogen-progestogen action to prevent unwanted pregnancy. In gynecological practice Regulon is also used for the correction of hormonal background, the menstrual cycle and treat conditions such as: 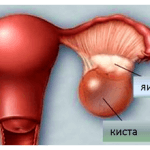 Regulon allows you to reduce the severity of premenstrual syndrome, painful sensations in the breast, the abdomen and in the lumbar region, to reduce the amount of menstrual flow, to clean the skin from acne. 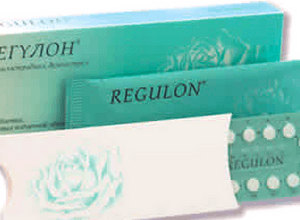 A regulon provides almost 100% contraceptive effect when properly applied according to the manufacturer’s recommendations. Pass contraceptive requires immediate admission of additional doses of drug or use local contraception. Combined monophasic action of the drug depends on the method of application and the reasons for which he was appointed.

Adaptation period when using the Regulon on average lasts about 3 months. At this time, see hormonal changes, which can manifest in the form of intermenstrual bleeding. They are not the reason for the cancellation of the medicine. After this period, the hormonal balance is harmonized, and continued taking synthetic hormones was not serious. However, in the case of prolonged abnormal discharge from the vagina, consultation of gynecologist is mandatory.

The excitement also cause absence of menstruation after the course of pills. Monthly can come later. Amenorrhea may indicate pregnancy, if there were violations of the patterns of use of the drug.

To ensure a reliable contraceptive effect Regulon must be taken from the beginning of the menstrual cycle, i.e. from the first day of the menstrual secretions. Acceptable is the delay to 5 days. In the first 7 days requires barrier methods of protection (condoms). It should be noted that the calendar method of contraception is unreliable: the risk of pregnancy is quite high.

Regulon drink for 21-day period followed by a break of 7 days. In a seven-day break should undergo menstruation (usually after 2 – 3 days after discontinuation of the drug). Spotting testify to the expiration of contraceptives. In spite of breakthrough bleeding, contraceptive effect lasts up to 28 day menstrual cycle. Day 29 Regulon take from a new package.

The rules of admission

The contraceptive and therapeutic effects of Regulon depends on the scheme and duration of admission:

The intake of synthetic analogues of sex hormones is a serious interference in a woman’s body that causes a change in natural hormone levels. The use of hormonal means should be preceded by a consultation of a gynecologist (endocrinologist) and submission of the necessary tests to determine the level of hormones in the blood.

There are situations when the use of synthetic hormones is contraindicated:

Not all these factors are absolute contraindications to the use of hormones. At elimination of precipitating factors and additional examination, the woman may continue to take hormonal agent.

In the absence of contraindications to the use of synthetic hormones unpleasant effects are rare. Mostly complications arise in the presence of systemic diseases, uncontrolled reception of tablets exceeding the recommended dose.

The most common side effects include:

READ  How to look like a young woman in 47 years

Hormonal contraception in the form of preparations of systemic action has proved effective for over a decade. Pronounced contraceptives and the therapeutic effect observed in case of rational use of hormones, lack of contraindications. Preliminary diagnosis of the organism, consultation of the gynecologist and the compliance with its recommendations to prevent the risk of possible complications.